“We evaluated the components of the Fuenzalida-Palacios antirabies vaccine, which is till used in most developing countries in human immunization for treatment and prophylaxis. This vaccine is prepared from newborn mouse brains at 1% concentration. Even though the vaccine is considered to have a low myelin content, it is not fully free of myelin or of other undesirable components that might trigger adverse effects after vaccination. The most severe effect is a post-vaccination neuroparalytic accident associated with Guillain-BarrĂ© syndrome. In the present study we demonstrate how the vaccines produced and distributed by different laboratories show different component patterns with different degrees of impurity and with varying protein concentrations, indicating that production processes can vary from one laboratory to another. These differences, which could be resolved using a better quality control process, may affect and impair immunization, with consequent risks and adverse effects after vaccination. We used crossed immunoelectrophoresis to evaluate and demonstrate the possibility of quality control in vaccine production, reducing the risk factors possibly involved in these immunizing products.”

“A two-day-old male neonate was inadvertently immunized with 20-times the recommended dose of Bacillus Calmette-GuĂ©rin (BCG) vaccine (1.0 ml instead of 0.05 ml).”

đź›‘ Assessment of iatrogenic transmission of HCV in Southern Italy: was the cause the Salk polio vaccination?

“Since the first studies on hepatitis C virus (HCV) prevalence were published, it has been evident that southern Italy is an area of hyperendemicity. A recent study conducted in southern Italy suggested that the high prevalence of HCV infection might be the result of past iatrogenic transmission. Polio vaccination with the parenteral Salk vaccine between 1956 and 1965 by multiple use of unsafe glass syringes may have been one of the major causes of the spread of HCV infection among southern Italian adults who are now older than 40 years of age. Persons born between the 1940s and early 1960s have a nearly 3-fold increased risk of HCV seropositivity than the younger age group. The findings are consistent with a cohort effect of exposure to the Salk parenteral vaccination.”

“In 2014, health staff who were vaccinating children in rebel-held northern Syria accidentally administered a muscle relaxant, atracurium, to up to 75 children, killing 15 of them. An investigation found that the drug was given to the children instead of a solution used to mix measles vaccines because the packaging was similar.”

“Twelve batches, constituting 4062 vials, of contaminated or potentially contaminated anti-D immune globulin were in circulation in 1977 through 1979 (the batches had an expiration date of mid-1979).”

“At least 15 children have died after being vaccinated against measles in northern Syria, owing to accidental injection of atracurium.1 The seriousness of this particular event is compounded by the fact that the deaths were associated with vaccination in a population in the midst of civil war whose trust in western medicine is already fragile.”

đź›‘ The cost of unsafe injections.

“Unsafe injection practices are associated with substantial morbidity and mortality, particularly from hepatitis B and C and human immunodeficiency virus (HIV) infections.”

“Annually more than 1.3 million deaths and US$ 535 million are estimated to be due to current unsafe injection practices. With the global increase in the number of injections for vaccination and medical services, safer injecting technologies such as auto-disable syringes must be budgeted for.” 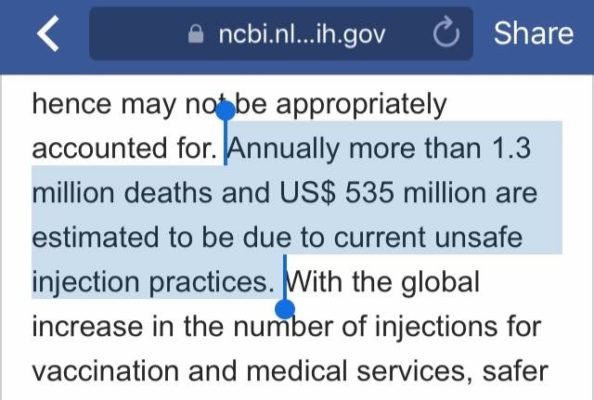 “The Irish Medical Councilâ€™s fitness to practice committee is to begin a disciplinary examination of the role of several doctors criticised by an official Tribunal of Inquiry into the countryâ€™s hepatitis C scandal. More than 1000 mothers were infected through contaminated anti-D immunoglobulin in the mid-1970s.”

“The findings of subdural hematoma and retinal hemorrhages in infants, without any documented history of major trauma, do not always indicate child abuse. A combination of ascorbate depletion and the injection of foreign proteins can cause a very high blood histamine level, leading to capillary fragility and venular bleeding. This can be prevented by the administration of vitamin C.”

The evidence base for shaken baby syndrome

“There is every reason to believe that infant deaths following
vaccinations could be prevented or markedly reduced by the administration
of vitamin C before inoculations, instead of the more usual paracetamol
(4, 5). Not only will there be a decrease in the infant death rate; but
also an important reduction in the incidence of cerebral palsy, epilepsy,
cognitive and behavioural problems, and intellectual impairment, can be
expected.”

Fetal damage after accidental polio vaccination of an immune mother.

“Irreparable damage to the anterior horn cells of the cervical and thoracic cord was found in a 20-week-old fetus whose mother was immune to poliomyelitis before conceiving but who was inadvertently given oral polio vaccine at 18 weeks gestation. Polio neutralizing antibody titres in sera, taken before and after pregnancy, were identical and were at levels normally regarded as providing protection. Unsuccessful attempts were made to isolate poliovirus from extracts of fetal brain, lung, liver and placenta. Fluorescent antibody tests were performed on various levels of the central nervous system and on the left and right extensor forearm muscles. Specific positive fluorescence to poliovirus 2 and 3 antigens was detected at dorsal spinal cord level only. One positive result was seen with Coxsackie A9 antiserum and fresh guinea-pig complement in the inflammatory cells in the right extensor forearm muscles.This experience, as yet unexplained, underlines the importance of ensuring that women are not pregnant prior to oral polio vaccination.”

Inadvertent Methylergonovine Administration to a Neonate.

“Mistaking methylergonovine for vitamin K with accidental administration to the neonate is a rare iatrogenic illness occurring almost exclusively in the delivery room setting.”

The injection century: massive unsterile injections and the emergence of human pathogens.

“Unsterile medical injections are common in the less-developed world, where most visits to a doctor result in the (generally unnecessary) administration of intramuscular, or subcutaneous drugs. WHO estimates1 that every year unsafe injections result in 80 000â€“160 000 new HIV-1 infections, 8Â·16 million hepatitis B infections, and 2Â·3â€“4Â·7 million hepatitis C infections worldwide (this figure does not include transfusions). Together, these illnesses account for 1Â·3 million deaths and 23 million years of lost life.”

“However, reports have it that about one-third of immunisation injections are unsafe in many countries of the world including Africa.”

“The common infections associated with unsafe injection listed by the subjects were abscess, HIV and Hepatitis in that order of frequency.”
“Re-use of syringe for vaccine withdrawal and re-capping of used needles before discard were common practices observed while accidental needle stick injury was reported by about half (49%) of the subjects.”

“On April 23, 2008, four children died soon after receiving measles vaccine stored in ice boxes in vaccination camps in two villages in Thiruvallur district of Tamil Nadu. As per parents and other eye witnesses, all children developed frothing at the mouth, drooping of the head, rolling of eye balls and died within 15 - 20 minutes of vaccination. No resuscitative equipment was available on site(1).”

“From 1983 to 1998, U.S. fatalities from acknowledged prescription errors increased by 243%, from 2,876 to 9,856. This percentage increase was greater than for almost any other cause of death, and far outpaced the increase in the number of prescriptions. Many nonfatal prescription errors also occur, but estimates of the frequency of these errors vary widely, because various definitions, geographic settings, and institutions have been used.”

“The nurse reported using two syringes she found among her supplies to administer vaccine to 67 employees of the New Jersey business. She reported wiping the syringes with alcohol and using a new needle for each of the 67 persons.”

Origins of and solutions for neonatal medication-dispensing errors.

“In 2008, there were five cases in which look-alike or sound-alike neonatal medication-dispensing errors occurred at our institution. A mix-up between neonatal and adult or pediatric products occurred in four of the five cases. Three of the five errors resulted in near misses with the potential to cause harm. The other two errors reached the patients but did not cause harm. The medication mix-ups involved adult and neonatal phytonadione injectable emulsion, sodium citrate injection and vancomycin-heparin combination injection, adult tetanus-diphtheria-acellular pertussis and infant diphtheria-tetanus-acellular pertussis (DTaP) vaccines, Haemophilus B and DTaP vaccines, and cisatracurium and vecuronium.”

Our prescription drugs kill us in large numbers.

“Our prescription drugs are the third leading cause of death after heart disease and cancer in the United States and Europe. Around half of those who die have taken their drugs correctly; the other half die because of errors, such as too high a dose or use of a drug despite contraindications. Our drug agencies are not particularly helpful, as they rely on fake fixes, which are a long list of warnings, precautions, and contraindications for each drug, although they know that no doctor can possibly master all of these. Major reasons for the many drug deaths are impotent drug regulation, widespread crime that includes corruption of the scientific evidence about drugs and bribery of doctors, and lies in drug marketing, which is as harmful as tobacco marketing and, therefore, should be banned. We should take far fewer drugs, and patients should carefully study the package inserts of the drugs their doctors prescribe for them and independent information sources about drugs such as Cochrane reviews, which will make it easier for them to say “no thanks”.”

“Two incidents were reported, where ephedrine and adrenaline were found in a box supposed to contain vitamin K for new-born babies.”

“The syringes will be used in administering vaccines and performing routine medical health procedures in the public health department and jail. The study was prompted by several cases in which health-care workers accidentally or carelessly exposed patients to HIV and other blood-borne diseases through the reuse of syringes labeled for one-time use.”

“Among 309 reports with an AE documented, 19 (6.1%) were serious and the most common categories were 152 (49.2%) general disorders and administration site conditions (mostly injection site and systemic reactions) and 73 (23.6%) immune system disorders with two reports of anaphylaxis. Four reports of GBS were submitted. Disproportional reporting was identified for ‘drug administered to patient of inappropriate age.'”

A survey of mycoplasma detection in veterinary vaccines.

“Nine live virus veterinary vaccines from six sources were found to be contaminated with mycoplasma. The vaccines were for use in canine, feline and avian species, and 53 batches of the products were at fault. The isolates were identified as Mycoplasma hominis, M. arginini, M. orale, M. hyorhinis and M. gallinarum.”

Too much of a good thing: management of BCG vaccine overdose.

Vaccine scandal and crisis in public confidence in China.

“In March, 2016, a vaccine scandal in Shandong province, eastern China, has led to the deaths of four children. According to state media, the prime culprit, a former pharmacist, was caught delivering vaccines to medical facilities on bicycles without approved storage conditions. The Shandong Food and Drug Administration made public a list of 25 problematic vaccines-including polio, mumps, rabies, hepatitis B, encephalitis, and meningococcal vaccinesâ€”that had been illegally sold in at least 24 provincial areas since 2011. Those vaccines are worth more than ÂĄ570 million (ie, US$88 million).”

Your Health Care May Kill You: Medical Errors. 2017.

“Recent studies of medical errors have estimated errors may account for as many as 251,000 deaths annually in the United States (U.S)., making medical errors the third leading cause of death. Error rates are significantly higher in the U.S. than in other developed countries such as Canada, Australia, New Zealand, Germany and the United Kingdom (U.K). At the same time less than 10 percent of medical errors are reported.”
“The results suggest that improving patient safety requires more than voluntary reporting. Organizational changes need to be implemented and institutionalized as well.”