“A fatal case of a 3-month-old female infant, who died within 24 h of vaccination with hexavalent vaccine is presented. Clinical data, post-mortem findings (acute pulmonary oedema, acute pulmonary emphysema), quali-quantitative data collected from immunohistochemical staining (degranulating mast cells) and laboratory analysis with a high level of beta-tryptase in serum, 43.3 microg/l, allows us to conclude that acute respiratory failure likely due to post hexavalent immunization-related shock was the cause of death.”

The epidemiology of fatalities reported to the vaccine adverse event reporting system 1990-1997.

“RESULTS: A total of 1266 fatalities were reported to VAERS during July 1990 through June 1997. The number of death reports peaked in 1992-1993 and then declined. The overall median age of cases was 0.4 years, with a range of 1 day to 104 years. Nearly half of the deaths were attributed to sudden infant death syndrome (SIDS).”

🛑 Hepatitis B vaccination and associated oral manifestations: a non-systematic review of literature and case reports.

Infant mortality rates regressed against number of vaccine doses routinely given: Is there a biochemical or synergistic toxicity?

“RESULTS: Of 1771 neonatal reports, there were 18 deaths in 8 boys and 9 girls (1 patient unclassified). The mean age at vaccination for these 18 cases was 12 days (range, 1-27 days); median time from vaccination to onset of symptoms was 2 days (range, 0-20 days); and median time from symptoms to death was 0 days (range, 0-15 days). The mean birth weight of the neonates (n = 15) was 3034 g (range, 1828-4678 g). The causes of death for the 17 autopsied cases were sudden infant death syndrome for 12, infection for 3, and 1 case each of intracerebral hemorrhage, accidental suffocation, and congenital heart disease.”

“Of the 41,792 adverse event reports submitted, 39,568 (95%) were for children younger than 7 years. 38,381 of the reports for children in this age group (97%) were for simultaneous vaccination with IPV and other vaccines (most commonly pneumococcal and acellular pertussis vaccines), whereas standalone IPV vaccines accounted for 0·5% of all reports. 34,880 reports were for non-serious events (88%), 3905 reports were for non-fatal serious events (10%), and 783 reports were death reports (2%). Injection-site erythema was the most commonly coded term for non-serious events (29%), and pyrexia for non-fatal serious events (38%). Most deaths (96%) were in children aged 12 months or younger; most (52%) had sudden infant death syndrome as the reported cause of death.”

Relative trends in hospitalizations and mortality among infants by the number of vaccine doses and age, based on the Vaccine Adverse Event Reporting System (VAERS), 1990-2010.

“…cases that specified either hospitalization or death were identified among 38,801 reports of infants.”

“Our findings show a positive correlation between the number of vaccine doses administered and the percentage of hospitalizations and deaths.” 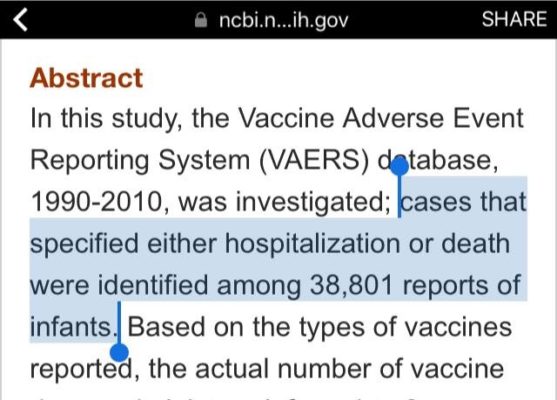 “Twin girls (3.5-month-old) were found dead by their mother in their crib, both in supine position. The infants were identical twins and delivered at a hospital by cesarean section. Both infants were healthy and did not have any serious medical history. Two days prior to the incident, the twins had received the second dose of oral polio, DPT and the first dose of hepatitis B vaccines and they had fever on the first day of the vaccination and been given teaspoonful of acetaminophen.”

Sudden and unexpected deaths after the administration of hexavalent vaccines (diphtheria, tetanus, pertussis, poliomyelitis, hepatitis B, Haemophilius influenzae type b): is there a signal?

“Herein we report the case of a 3-month-old female infant dying suddenly and unexpectedly shortly after being given a hexavalent vaccination. Examination of the brainstem on serial sections revealed bilateral hypoplasia of the arcuate nucleus. The cardiac conduction system presented persistent fetal dispersion and resorptive degeneration. This case offers a unique insight into the possible role of hexavalent vaccine in triggering a lethal outcome in a vulnerable baby. Any case of sudden unexpected death occurring perinatally and in infancy, especially soon after a vaccination, should always undergo a full necropsy study according to our guidelines.”

Vaccination with 10-valent pneumococcal conjugate vaccine in infants according to HIV status.