Bordetella parapertussis outbreak in Southeastern Minnesota and the United States, 2014. (2017)

“All patients were vaccinated against pertussis, suggesting that pertussis vaccination is ineffective against B. parapertussis.”

Duration of pertussis immunity after DTaP immunization: a meta-analysis.

“Pertussis incidence is increasing, possibly due to the introduction of acellular vaccines, which may have decreased the durability of immune response.”

🛑 Finding the ‘who’ in whooping cough: vaccinated siblings are important pertussis sources in infants 6 months of age and under.

“At its peak, siblings were the most important sources of pertussis in infants 6 months and younger, particularly fully vaccinated children aged 2 and 3 years. Waning immunity before the booster at 4 years may leave this age group susceptible to infection.” 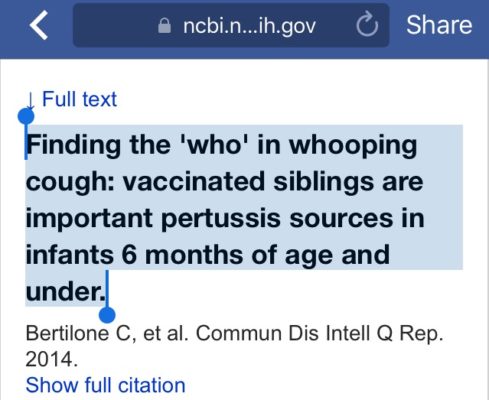 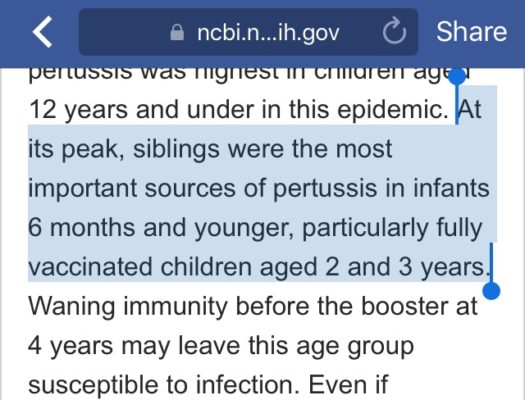 Gulf war syndrome: could it be triggered by biological warfare-vaccines using pertussis as an adjuvant?

“Several recent epidemiological studies have shown that vaccinations against biological warfare using pertussis as an adjuvant were associated with the Gulf war syndrome. If such epidemiological findings are confirmed, we propose that the use of pertussis as an adjuvant could trigger neurodegeneration through induction of interleukin-1beta secretion in the brain. In turn, neuronal lesions may be sustained by stress or neurotoxic chemical combinations. Particular susceptibility for IL-1beta secretion and potential distant neuronal damage could provide an explanation for the diversity of the symptoms observed on veterans.”

High rate of vaccine failure after administration of acellular pertussis vaccine pre- and post-liver transplantation in children at a children’s hospital in Japan.

“Hypotensive-hyporesponsive episodes are rare events after immunizations performed for diphtheria, tetanus, Haemophilus influenzae type b and hepatitis B virus vaccines, but most of the reported episodes have been associated with pertussis-containing vaccines. We report the case of a 3-month-old girl, previously healthy otherwise, presenting with the unusual event of a hypotonic-hyporesponsive episode after vaccination with the 13-valent pneumococcal vaccine. Diagnosis was established after a thorough evaluation of the patient and by exclusion of other clinical conditions.”

Note: “A hypotonic-hyporesponsive episode (HHE) is a sudden and unexpected episode of loss of tone, unresponsiveness and colour change which uncommonly affects infants and children after vaccination.” – MS Gold, PubMed

“An increased prevalence of pertussis in older populations has been found, mainly caused by waning immunity after vaccination.”

Japan’s experience in pertussis epidemiology and vaccination in the past thirty years.

“61 encephalopathy deaths and 18 shock deaths due to the vaccine were reported from 1952-1974, but this figure is probably low.”

“Twenty cases of acute neurological complications occuring within 7 days of pertussis immunization are reported. Convulsions were present in every case and status epilepticus was observed in five infants. In only 4 cases were neurological or epileptic sequelae lacking. The clustering of neurological complications in the 24 hours following immunization is not consistent with the hypothesis of a mere temporal coincidence. However, the mechanism and incidence of post-immunization encephalopathies remains obscure and epidemiological studies are in order.”

Outbreak of pertussis in highly immunized adolescents and its secondary spread to their families.

“An outbreak of pertussis was recognized in a highly immunized sixth-grade class of schoolchildren. Among 43 children aged 11-12 years in the class, 38 had been immunized with three doses or more of DTP containing whole-cell pertussis vaccine, two with two doses of DTP and three children were unimmunized. The last DTP vaccines had been given 6-10 years before the outbreak. A total of eight children with pertussis suffering paroxysmal coughing attacks for 3 weeks or more were identified, seven being fully immunized and one unimmunized. Among the eight cases, two were confirmed by both culture and serology and one by serology alone. The attack rate in fully immunized children was 18.4% (7/38). Secondary spread of pertussis was identified in five of the households from which the eight patients originated. A total of six cases of pertussis from these five households were identified, and two of these were culture-confirmed. These observations suggest that vaccine-induced immunity weakens considerably 6-10 years after vaccination, and that booster immunization with DTP instead of DT is therefore recommended for the control of pertussis.”

“CONCLUSIONS: Our findings indicate nanogram quantities of PT, when administered with a food protein, result in long-term sensitization to the antigen, and altered intestinal neuroimmune function. These data suggest that exposure to bacterial pathogens may prolong the normally transient immune responsiveness to inert food antigens.”

“Despite high levels of vaccination coverage, pertussis circulation cannot be controlled at all. The results question the efficacy of the present immunization programmes.”

Pertussis: History of the Disease and Current Prevention Failure.

Pertussis outbreak in US elementary school with high vaccination coverage.

“CONCLUSIONS: Our data suggests that the current schedule of acellular pertussis vaccine doses is insufficient to prevent outbreaks of pertussis.”

Why Do Pertussis Vaccines Fail?