“Their malignant tumor growth was further demonstrated around the 500 passage level when tumor metastases were detected in the lungs of four of the 14 inoculated rats. Vero cells induced such lung metastases in rats already at passage 227.”

Assessing the tumorigenic phenotype of VERO cells in adult and newborn nude mice.

“During tissue-culture passage, VERO cells can develop the capacity to form tumors.”

“Millions of people worldwide were inadvertently exposed to live simian virus 40 (SV40) between 1955 and 1963 through immunization with SV40-contaminated polio vaccines. Although the prevalence of SV40 infections in humans is not known, numerous studies suggest that SV40 is a pathogen resident in the human population today. SV40 is a potent DNA tumor virus that is known to induce primary brain cancers, bone cancers, mesotheliomas, and lymphomas in laboratory animals.”

“A patient with basal-cell epithelioma occurring in a smallpox vaccination site is reported. The association is probably not a chance occurrence.”

“A 52 year old housewife was vaccinated against smallpox at the age of 18, on her right deltoid area. At the age of 50 she noticed erythema and scaling on the vaccination scar and 2 years later a nodule appear that enlarged during the following 3 months. There was no history nor skin changes suggestive of significant sun exposure. The histological examination of an initial biopsy and of the subsequently excised lesion revealed a basal cell carcinoma of the solid type.”

[Cancer on a smallpox vaccination scar].

“A 52 year old housewife was vaccinated against smallpox at the age of 18, on her right deltoid area. At the age of 50 she noticed erythema and scaling on the vaccination scar and 2 years later a nodule appear that enlarged during the following 3 months. There was no history nor skin changes suggestive of significant sun exposure. The histological examination of an initial biopsy and of the subsequently excised lesion revealed a basal cell carcinoma of the solid type.” 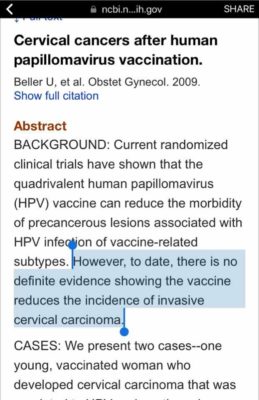 “…but there was a significant association (p = 0.002) with intramuscular vitamin K (odds ratio 1.97, 95% confidence interval 1.3 to 3.0) when compared with oral vitamin K or no vitamin K. There was no significantly increased risk for children who had been given oral vitamin K when compared with no vitamin K (odds ratio 1.15, 95% confidence interval 0.5 to 2.7). These results could not be accounted for by other factors associated with administration of intramuscular vitamin K, such as type of delivery or admission to a special care baby unit.”

“The only two studies so far to have examined the relation between childhood cancer and intramuscular vitamin K have shown similar results, and the relation is biologically plausible. The prophylactic benefits against haemorrhagic disease are unlikely to exceed the potential adverse effects from intramuscular vitamin K. Since oral vitamin K has major benefits but no obvious adverse effects this could be the prophylaxis of choice.”

“Retroviruses are classified as exogenous or endogenous according to their mode of transmission. Generally, endogenous retroviruses (ERVs) are not pathogenic in their original hosts; however, some ERVs induce diseases. In humans, a novel gammaretrovirus was discovered in patients with prostate cancer or chronic fatigue syndrome. This virus was closely related to xenotropic murine leukemia virus (X-MLV) and designated as xenotropic murine leukemia virus-related virus (XMRV). The origin and transmission route of XMRV are still unknown at present; however, XMRV may be derived from ERVs of rodents because X-MLVs are ERVs of inbred and wild mice. Many live attenuated vaccines for animals are manufactured by using cell lines from animals, which are known to produce infectious ERVs; however, the risks of infection by ERVs from xenospecies through vaccination have been ignored. This brief review gives an overview of ERVs in cats, the potential risks of ERV infection by vaccination, the biological characteristics of RD-114 virus (a feline ERV), which possibly contaminates vaccines for companion animals, and the methods for detection of infectious RD-114 virus.

2010 The International Association for Biologicals. Published by Elsevier Ltd. All rights reserved.”

“While a number of epidemiological studies of childhood acute lymphocytic leukemia (ALL) have been conducted, separate analysis of risk factors for ALL subtypes has generally not been possible. We report the results of an analysis of data obtained from parents of children with ALL (and a control group of children without cancer), linked to a clinical database. Cases were classified into four ALL subtypes, and odds ratios (OR) were determined for each subtype for a broad range of factors. Numerous significant associations were found, some across all subtypes and others that were subtype-specific. Factors with elevated and/or significant ORs included: (i) for common ALL (n = 286): Down syndrome; family history (FH) of bone/joint diseases; postnatal jaundice; birthweight; MMR vaccination; exposure to gases and insecticides; and parental occupational exposure to insecticides. (ii) for pre-B ALL (n = 38): FH of gastrointestinal, hematological or bone/joint diseases, or allergy; cat ownership; exposure to solvents, fumes, petroleum products, cleaning agents and farm animals; and parental exposure to farm animals, fumes and solvents; (iii) for T-cell ALL (n = 158): FH of gastrointestinal disorders, maternal age, male gender, and parental occupational exposure to metals; (iv) for null-cell ALL (n = 65): FH of congenital heart disorders; measles; and parental occupational exposure to fumes, metals or solvents. This analysis should be considered as a hypothesis-generating process for future case-control interview studies.”

“The results revealed lot-to-lot variations in the tumorigenicity of MDCK cells, which were reflected by their tumor-inducing efficiency (threshold cell dose represented by mean tumor-producing dose; log(10) 50% endpoints of 5.2 for vial 1 and 4.4 for vial 2, and a tumor-producing dose of 5.8 for vial 3) and mean tumor latency (vial 1,6.6 wk; vial 2,2.9 wk; and vial 3,3.8 wk). These studies provide a reference for further characterization of the MDCK cell neoplastic phenotype and may be useful in delineating aspects of neoplastic development in vitro that determine tumor-forming capacity. Such data also are useful when considering MDCK cells as a reagent for vaccine manufacture.

Copyright 2011 by the American Association for Laboratory Animal Science”

“Formaldehyde is diluted during the vaccine manufacturing process, but residual quantities of formaldehyde are still present in some current vaccines. Although formaldehyde is considered safe for use in vaccines by the Food and Drug Administration, excessive exposure to this chemical may lead to cancer or other health-related issues.”

HPV-negative Gastric Type Adenocarcinoma In Situ of the Cervix: A Spectrum of Rare Lesions Exhibiting Gastric and Intestinal Differentiation.

“The introduction of HPV vaccination will result in a relative increase in incidence of premalignant and malignant cervical glandular lesions exhibiting gastric differentiation and these will not be detected by HPV-based screening programs.”

đź›‘ [Lymphoma of the thyroid in a patient with autoimmune thyroiditis and SjĂ¶grenâ€™s syndrome-case report].

“As many years of immunisation may lead to carcinogenesis it is important to raise awareness among medical staff with regard to cases of chronic autoimmune disease.” 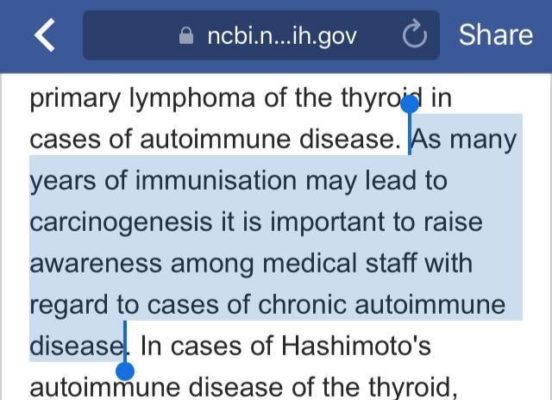 Malignant Tumors as a Late Complication of Vaccination

“Four basal and one squamous cell carcinomas and a single instance of a malignant melanoma arising in vaccination scars have occurred in five southern California patients. Sun exposure on a previously scarred skin was the main etiological factor in the development of the basal and squamous cell tumors. Sun exposure was probably unimportant in the case of the melanoma because of the short time interval between vaccination and the development of the tumor.”

Malignant tumors in smallpox vaccination scars: a report of 24 cases.

“A study of 24 patients with proved malignant tumors originating in smallpox vaccination scars is reported. Three different tumor types were foundâ€”malignant melanomas, basal cell carcinomas, and squamous cell carcinomas. There was no exposure to known chemical carcinogens. In most cases a primary vaccination site was involved. The period of time between the vaccination and appearance of the malignant tumor was highly variable. Twenty-three of the patients were from various regions of the United States and one from the Republic of South Africa. Two patients presented tumors in vaccination sites bilaterally.

Mumps and ovarian cancer: modern interpretation of an historic association

đź›‘ Observations on vitamin K deficiency in the fetus and newborn: has nature made a mistake?

“This protective effect of low K1 levels is particularly important in the presence of the high mitotic rates and rapid cell turnover in the avian embryo and mammalian fetus.”

Of Mice and Men: On the Origin of XMRV.

“The novel human retrovirus xenotropic murine leukemia virus-related virus (XMRV) is arguably the most controversial virus of this moment. After its original discovery in prostate cancer tissue from North American patients, it was subsequently detected in individuals with chronic fatigue syndrome from the same continent. However, most other research groups, mainly from Europe, reported negative results. The positive results could possibly be attributed to contamination with mouse products in a number of cases, as XMRV is nearly identical in nucleotide sequence to endogenous retroviruses in the mouse genome. But the detection of integrated XMRV proviruses in prostate cancer tissue proves it to be a genuine virus that replicates in human cells, leaving the question: how did XMRV enter the human population? We will discuss two possible routes: either via direct virus transmission from mouse to human, as repeatedly seen for, e.g., Hantaviruses, or via the use of mouse-related products by humans, including vaccines. We hypothesize that mouse cells or human cell lines used for vaccine production could have been contaminated with a replicating variant of the XMRV precursors encoded by the mouse genome.”

đź›‘ Oral polio vaccine and human cancer: a reassessment of SV40 as a contaminant based upon legal documents.

“The confirmation of the removal by one drug manufacturer, Lederle, has been made public at an international symposium in January 1997, where its representatives stated that all of Lederleâ€™s seeds had been tested and screened to assure that it was free from SV40 virus. However, in litigation involving the Lederle oral polio vaccine, the manufacturerâ€™s internal documents failed to reveal such removal in all of the seeds. The absence of confirmatory testing of the seeds, as well as testimony of a Lederle manager, indicate that this claim of removal of SV40 and the testing for SV40 in all the seeds cannot be fully substantiated. These legal documents and testimony indicate that the scientific community should not be content with prior assumptions that SV40 could not have been in the oral polio vaccine.”

đź›‘ Polio, hepatitis B and AIDS: an integrative theory on a possible vaccine induced pandemic.

“The hypothesis that simian virus 40 (SV40) infected polio vaccines may be linked to the evolution of acquired immunodeficiency disorder (AIDS), and certain cancers, has been advanced. Most recently, investigators discussed the likelihood of gene-reshuffling following SV40 infection as a precursor to acquired immune dysfunction. Findings of recent SV40 infections in four children born after 1982 suggest infections were transmitted vertically along gene lines. Earlier observations proved activation of a retrovirus gene by a hepatitis B virus (HBV) protein. This paper proposes a new integrative theory on the origin of AIDS. It advances the possibility of genetic recombinations with oncogene activation by HBV involving simian viruses that likely infected polio vaccinated blood donors to the initial hepatitis B (HB) vaccine trials conducted on gay men in New York City and Ugandan Blacks in the early to mid-1970s. The socio-economic and even military ramifications associated with this politically challenging thesis are discussed.”

“Marjolinâ€™s ulcer is an aggressive squamous cell carcinoma (SCC) found in chronically inflamed skin. SCC has been reported in smallpox vaccination sites, whereas basal cell carcinomas are more common in scar after bacille Calmette-GuĂ©rin (BCG) vaccination. A 72-year-old man presented with a chronic ulcer at the site of his childhood BCG vaccination.”

“Many cell lines used for vaccine production have a potentially strong tumorigenic character.”

“They were derived from African green monkey kidney, and their growth properties and culture characteristics have many advantages over other cell substrates for use in vaccine production. We have tested Vero cells for tumorigenicity in nude mice and in a human muscle organ culture system, and found a significant increase in their tumorigenic potential with increasing passage numbers.”